Randall Flynn was the Assistant Secretary of the Department of Defense and the major antagonist of Season 1. He is one of the 28 names on a list encrypted on Grace Beaumont's computer. It was later revealed that he was the member of the Patriots

Before the Blackout, Randall and his wife Lisa Flynn lived in Alexandria, Virginia.

Three years before the Blackout Randall Flynn, the Assistant Secretary for the Department of Defense examines Ben Matheson and his coworkers' invention that would supply the world with low cost energy. Much to his dismay however, their experiment into finding new sources of energy is revealed to be a failure. Ben explains however that their invention inadvertently does the opposite-inhibits electricity. After witnessing a small demonstration of power being inhibited within a room, the assistant secretary is awestruck with their invention and quickly asks Ben if it can be mass-produced, to which he affirms. He wants Matheson's start-up company to be under contract with the Department of Defense. Ben is quick to accept his offer only to be dissuaded by Rachel who is resistant to the idea.

Later on, when Rachel discovers her unborn son has a congenital heart defect, Randall offers to get her into a medical trial at Columbia University which might be able to remedy her problem. Randall assures her that despite the trial already being full of patients, he can fit her in as a gesture of their friendship.

One year before the Blackout, Randall is sitting in his house with his wife. The doorbell rings and an Army soldier informs them that their son Edward has been killed in action near Kabul, Afghanistan. His death became Randall's motivation to pursue Ben Matheson's nanite project.

At some point he acquired one of the twelve pendants . Fifteen years after the Blackout he tracked down Grace Beaumont at her home. She quickly recognizes him and shuts the door. She runs to inform her mysterious contact that he had found her. Randall breaks through the door and comes up to the attic. He then reveals a cattle prod in his hands, and starts threatening her by repeatedly flashing it.

In The Children's Crusade Randall is shown to be holding Grace alive as a prisoner.

It is revealed in Ties That Bind that Randall has been tracking the twelve pendants around the country. When he noticed that Ben's pendant was in Philadelphia, he came to the conclusion that General Monroe had the pendant. While standing in the balcony of a gigantic unknown room that has electricity, Randall told Grace that she will do something to change that.

In The Stand, Randall is in the Tower and his guard was tasked to keep an eye on Grace, while Randall leaves the tower to see General Sebastian Monroe. Later, Randall and John Sanborn went to see General Monroe, where he teamed up with him.

In Ghosts, after he teamed up with Monroe, Randall gave him more Pendants and Amplifiers, which powered up more vehicles and weapons for the Monroe Republic. Later, he led the Monroe Militia to track down Rachel Matheson, but Rachel and the others manage to escape.

In The Song Remains the Same, Randall, Monroe and Neville had a meeting about their plans. After Neville's capture, Monroe sends Randall to deliver him a nuclear weapon to destroy Atlanta. Later, Randall was seen at the cement factory, where he's going to deliver a nuclear device to Monroe.

In The Love Boat, Randall was seen at Independence Hall, talking to Monroe.

In Clue, after Monroe discovers Randall's secret, including the Tower, he became suspicious and orders his men to kill him, but Randall tells him that without his help, he can't get the power back on. Later, Monroe bring him to the Tower with the Militia. Randall tries to open the door, but he can't get in, with the people in the Tower watching him and Monroe.

In Children of Men, after Rachel is captured by Monroe and his Militia, they opened the door to the Tower and Randall went with them. After Randall shows them everything about The Tower, he tells Monroe the truth about getting to Level 12, much to Rachel's shock. Later, they were attacked by a group of people in the Tower and Randall escapes.

In The Dark Tower, he launched ICBM's at Atlanta and Philadelphia, declaring that he was a patriot and then committed suicide after shooting the missile control panel. It is then revealed that Randall was working for the President of the United States.

The President depicted at the United States Colony in Guantanamo Bay, Cuba after being informed of Randall's actions. In Season 2, it was later revealed that Randall Flynn was working for the Patriots. 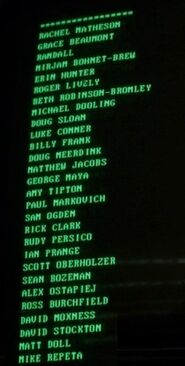