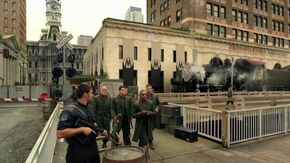 Philadelphia, Pennsylvania was the capital of the Monroe Republic. Sebastian Monroe used Independence Hall as his headquarters.[1]

Monroe has been holding Rachel at Independence Hall for years and this is where both Bradley Jaffe and his daughter Eve are introduced as Monroe's prisoners. Miles mentions that the walls around the city are 30 feet high, with machine gun nests. An old subway tunnel leads from the outskirts into the city, but it is heavily mined.

Eleven years after the Blackout, Monroe began to stockpile modern weaponry and military vehicles in the city. At one point, Private Jacob Renn was on gate guard duty and allowed Miles Matheson to escape the city.

At the end of Season 1, the power was turned back on at The Tower. Randall Flynn uses the opportunity to fire nuclear missiles at Philadelphia and Atlanta, Georgia which destroyed both cities.

Retrieved from "https://revolution.fandom.com/wiki/Philadelphia,_Pennsylvania?oldid=22345"
Community content is available under CC-BY-SA unless otherwise noted.