Aaron Pittman (1987-2029) was a computer genius ill-prepared for the rigors of the world he currently lives in.

Aaron was born in 1987 to a Jewish family. He is originally from Minnesota. Before The Blackout, he went to MIT, where he and his roommates would spend hours thinking of technologies that could change the world. During that time, he earned 2 doctorates. Later on, he worked for Google in a position which had earned him at least 80 million dollars. Aaron used a portion of his earnings to purchase an aircraft. At some point before the Blackout he got married at The Grand Hotel in Chicago, to Priscilla. She did not care about his wealth and married him because of his loving personality. He was also a dog person, and owned a male King Charles Cavalier named Zoey.

Two months after the Blackout, Aaron and his wife desert the city where conditions have deteriorated. Priscilla contracts dysentery after drinking from the now-compromised Lake Michigan after the failure of the sewage pumps.  They encounter Sean, a young man also fleeing from the city and gives Priscilla medicine.

At some point, they encounter a band of survivors who they join as they live in the wild. When they are ambushed by looters, Aaron is injured attempting to protect his wife but is rescued by Sean. That night, Aaron expresses his discontent about not being able to protect his wife. Priscilla comforts him by assuring Aaron he is the only one that matters to her. Despite this, Aaron acquiesces about his fragile strength and decides to leave Priscilla as he cannot protect her. He leaves a message to which Priscilla reads the next morning much to her dismay.

At some point after leaving his wife, he encounters Ben Matheson's village and settles with them. He goes on to teach a group of kids about The Blackout at one point, much to their disinterest. Later, he talks to his friend, Ben Matheson, about The Blackout, shortly after which a militia squad arrived at the village. Ben gives his flash drive to Aaron and trusts him to keep it secret. Ben is fatally shot by Militia while trying to calm his son, and instructs Charlie to track down his brother Miles in Chicago. Aaron and Maggie, Ben's girlfriend, also go on the journey. They come upon a wrecked plane and settle there for the night. During the night, three thugs find them in the plane, Aaron is easily scared but Maggie points to her backpack in which the thugs find a bottle of alcohol. One of the thugs pull Charlie to the cockpit. The robbers who ingested the alcohol begin to cough up blood and Maggie seizes the opportunity and chokes the thug to death as Aaron watches with horror. Charlie is saved by Nate Walker, and they all travel to Chicago together.

They arrive at Chicago and enter a bar/hotel, which Aaron comments is the one he got married in. Charlie asks the bartender if Miles is here. The bartender says he does not know him. After Charlie explains of the events that led them there, the bartender asks her to follow him. Walker mistrusts the bartender and pulls out a knife. The bartender easily takes it and explains that she was his niece and he does not know him. Charlie and Miles go to the backroom. Charlie comes back, crying and says they need to leave. Walker angrily asks Miles what he did. Miles once again pulls the knife away and pulls down his shirt sleeve, revealing a militia insignia branded on Walker's arm. Walker takes out his bow and arrow and leaves the bar. There was danger that Walker would come back with more militia and Charlie asks Miles to leave with them. He refuses but the group still stays in the bar.

The militia arrive and the group fights along with Miles to drive them away. Aaron and Maggie use a rope to trip some of the militia men. After that, Aaron just watches as everyone else fights. After they drive the militia away, they group together in the kitchen as Maggie fixes a wound Miles sustained. Aaron is frightened when Miles comments that the Militia will "have their heads on sticks", and Miles agrees to leave with them.

They arrive in a train yard and Charlie asks where Miles was. They find him fighting a bounty hunter who was given orders by Bass Monroe to follow and capture Miles. Miles knocks Jacob out and as he was about to execute him Charlie begs him to stop. Miles states if he doesn't, Jacob would continue to follow and pose a threat to the group. Charlie still does not want Miles to kill Jacob in cold blood, so he asks for Aaron's help to carry him to a boxcar. They carry Jacob there and lock him in.

The group arrive at a market town in Pontiac, Illinois where Miles hopes to find a woman named Nora, who he says she would be a great asset in their hopes of rescuing Danny as she was very good at "blowing stuff up". When walking past a preacher who was talking about the old era when they had all their electrical devices Aaron makes a vague comment of the market selling heroin. Miles tells the group to stay while he checks the gambling hall for Nora. However, as soon as he leaves, Aaron and the rest are quickly captured by Jacob's men, being able to escape from the boxcar and tracking them down all the way to Pontiac. Aaron and the others are held by knife point and are taken to the gambling hall with Miles and Jacob. Jacob threatens Miles that he will order them to be killed if he does not surrender. Miles states he does not know them. As Charlie was about to have her throat slit Miles finally surrenders himself.

They are about to be taken out of the market when Miles helps the others escape. Miles leaves the group, knowing they were holding him back, and Charlie follows him while Aaron and Maggie were sleeping. The next morning, they wake up to find Charlie gone and Aaron finds a note. On their own now, Aaron reveals The Pendant, Ben told him to keep safe before he died, to Maggie. They discuss matters and follow Ben's instructions, they head to find Grace Beaumont, who also possesses a switch.

When they arrive at Grace's home, they find it empty. They discover computer parts upstairs, and Aaron reminisces when he worked with computers before the blackout. He assumes Grace must have built a computer, and tries to figure out what she did. Later, The Pendant turns on and Aaron discovers that the music of Marvin Gaye is playing on a CD player by the window. Maggie is able to turn on her iPhone and see a photo of her children. However, the power shuts off soon after.

Aaron and Maggie arrive in Lowell, Indiana, and are met by Miles, Charlie, and Nora. They continue to go after Danny, and end up at an amusement park. The group is chased by a pack of dogs, but they escape by climbing over a fence. However, Aaron is bitten on the leg just as he reaches the top. Later, Maggie is attacked and Charlie is kidnapped, but she is later rescued. Maggie begins to lose a lot of blood, so he and Nora try to perform surgery. However, it is not enough, and Maggie dies in the diner at the amusement park.

Aaron was almost forced to shoot Nora by Drexel . He shot himself in the chest instead, but a flask in his breast pocket stopped the bullet. Drexel kicked him, and mistook Aaron for dead. Then Aaron shot and killed him.

Journey to the tower

Aaron arrives at the Tower intact and following Rachel's instructions, successfully turns the world's power back on. After this, Randall Flynn enters the room and launches nuclear missiles Atlanta and Philadelphia in an attempt to wipe out the Monroe Republic and Georgia Federation. Aaron attempts to shut the power off in time, but fails by only a couple seconds. Randall then says, "I'm a patriot," and shoots himself in the head.

Last Will And Testament

"Please find Charlie Matheson and give this to her, because it is my last will and testament."

To Charlie: What you should know is - your mother died a hero. She walked into the middle of a Militia camp and killed Monroe herself. She told me it was for Danny, but I think she also did it for you. She did it so this whole thing would end and you could finally have the life she always wanted for you. She loved you, Charlie, even if she was bad at saying it. If I'm truly gone, I leave you the three-and-a-half postcards in the left pocket of my backpack. Stop fighting. See the world, and never forget how beautiful it can be.

To Nora: You'll never know how much it meant to me to have you with us. I may love the old world, but you love something better. You fight for an America greater than the one that fell, and one I desperately wanted to live in. With Monroe gone, I know you will not only make this dream a reality, but you'll make one hell of a mother.

To Miles: I'm not gonna lie. I dreamed of knocking you out and leaving you for dead on more than one occasion - 27 actually. But despite your mildly sociopathic behavior and unfunny fat jokes, you have a heart. It might be three sizes too small, but it's big enough to make up for your many wrongs. You won. The world forgives you. Start over. As a thanks, I leave you my flask. There's a dent in it from a bullet. Enough said.

And to Priscilla: Thank you for loving this silly, clumsy fool. I will never forgive myself for leaving you but please know, no matter the outcome, I did everything in my power to give you and your daughter a world where the strong no longer prey on the weak. I love you and I will see you again.

When the War Clan led by Titus Andover invade Cynthia's home and Aaron tries to protect Cynthia he becomes badly injured by a sword. Rachel and her father fail to revive Aaron.

Approximately two and a half hours after his supposed death, Aaron comes back to life and eventually his wounds completely disappear. He hears a gunshot and goes to investigate, finding himself reliving the day that Ben Matheson died, but then Cynthia interrupts asking if Aaron is okay. Aaron believes the nano-technology brought him back to life, but Cynthia thinks it is a miracle until Aaron explains.

In the Revolution DC Comics, he and Priscilla are shot to death by Truman when they were trying to kill the nanotech.

" $80 million dollars in the bank. I would trade it all, right now, for a roll of Charmin."
—Aaron

"Your dad was my friend; I am going too."
—Aaron

"So... famous last words, right? For those about to rock, I salute you."
—Aaron. 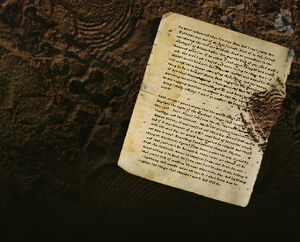 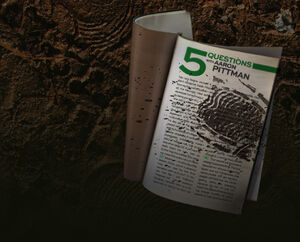 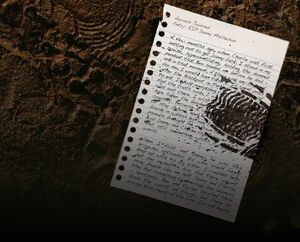 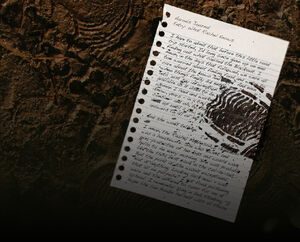 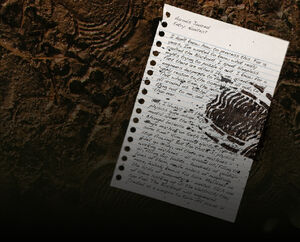 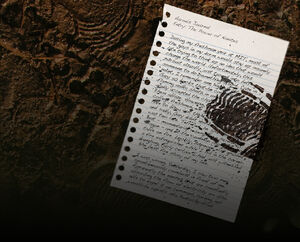 Aaron's Journal: The Power of Nanites 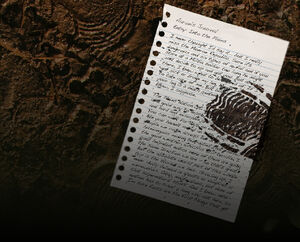 Aaron's Journal: Into the Plains 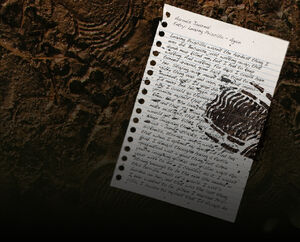 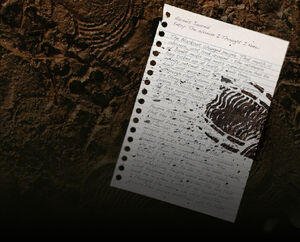 Aaron's Journal: The Woman I Thought I Knew 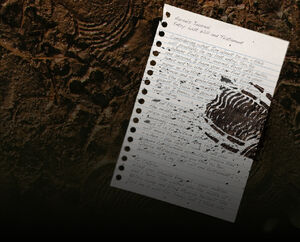 Aaron's Journal: Last Will and Testament 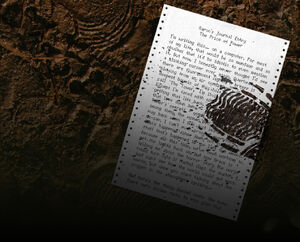 Aaron's Journal: The Price of Power 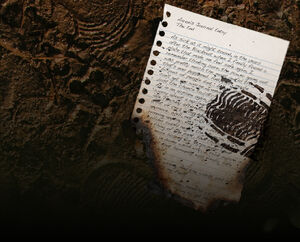